Tell the Federal Reserve:
The Economy Needs to Work For All of Us

Everyone who wants a job should be able to find one.

About the Fed Up Campaign

The Fed Up Campaign is fighting for full employment, rising wages, and a Federal Reserve that works for working people.

The Federal Reserve is our country’s most powerful economic policy institution. Twelve Fed leaders meet every six weeks to make decisions that include how many people should be unemployed and whether wages should be going up. Most of those leaders are white men who come from Wall Street.

Our communities continue to suffer a weak recovery and growing economic inequality, but Wall Street interests are demanding that the Fed put the brakes on growth and keep wages down.

Fed Up is fighting for people's organizations to have their voices heard and demand that the Fed take its mandate for full employment and decent wages seriously.

And we want the leadership of the Fed at all levels to be more diverse so it looks and thinks like the working people it is supposed to represent, not Wall Street. 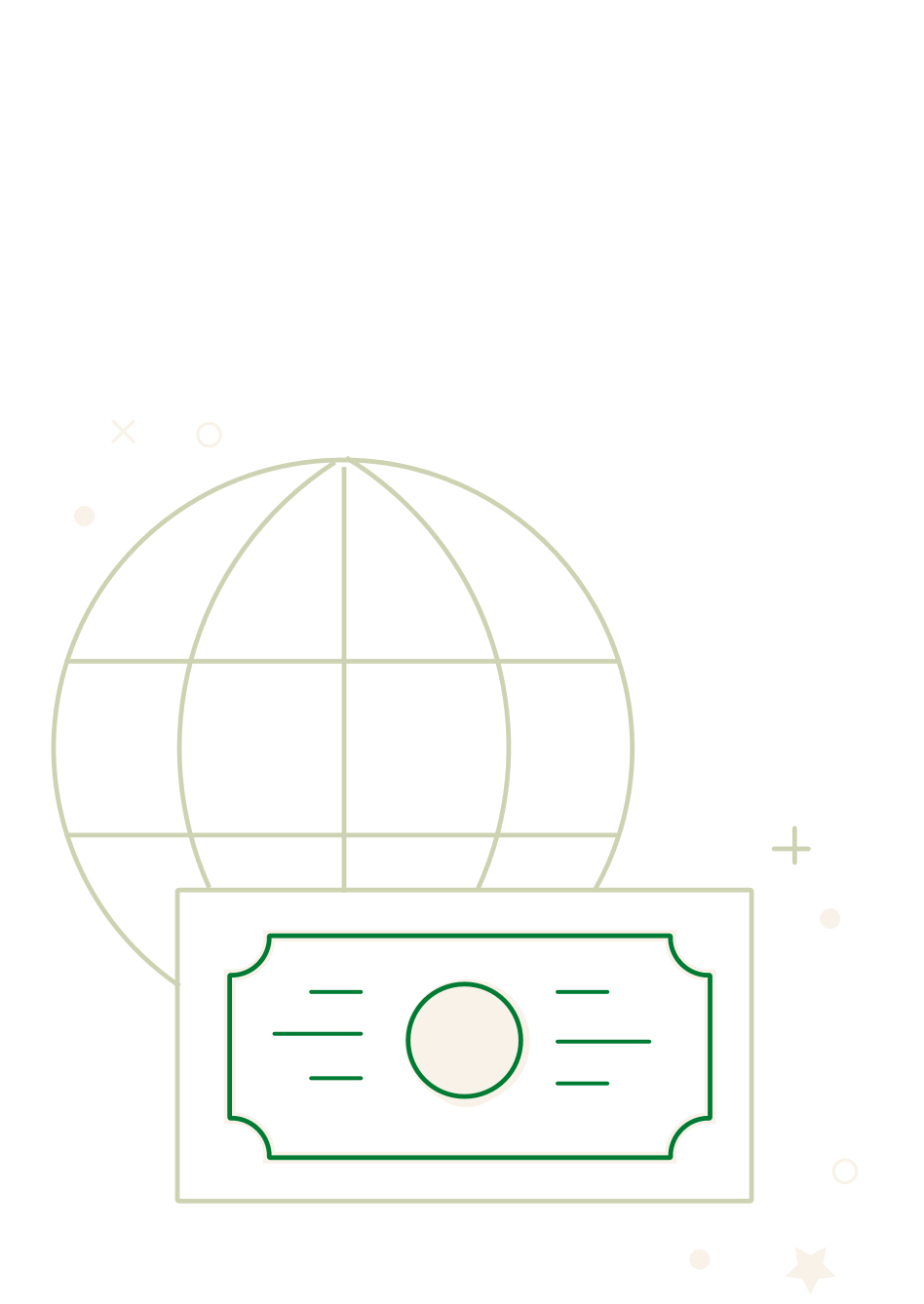 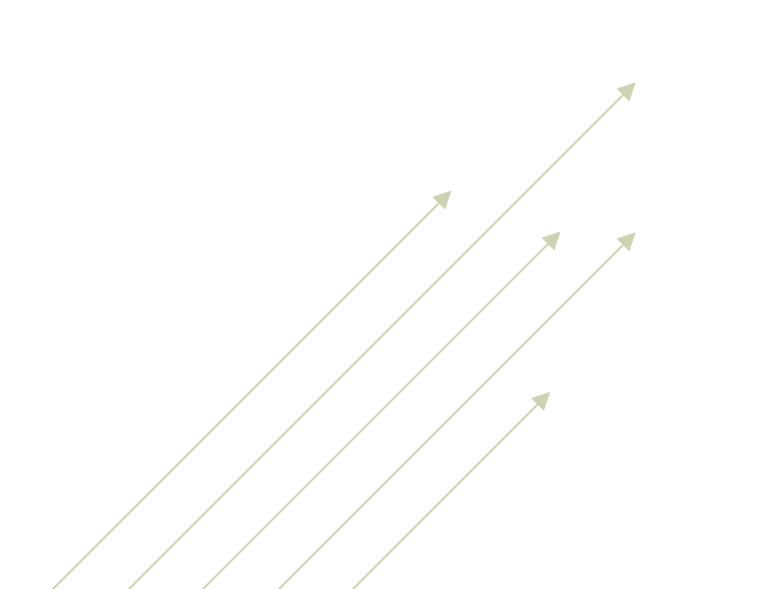 12 leaders of the country’s central bank, the Federal Reserve, meet every six weeks to set the course of the economy: they decide how many people will be unemployed during economic recoveries.

We all know unemployment hurts Black and brown communities the most, taking away opportunities for generations and trapping people in cycles of poverty.

Everyone who wants to find a job should be able to find a job. Everyone deserves a chance for economic dignity, rising wages, and the opportunity to succeed. 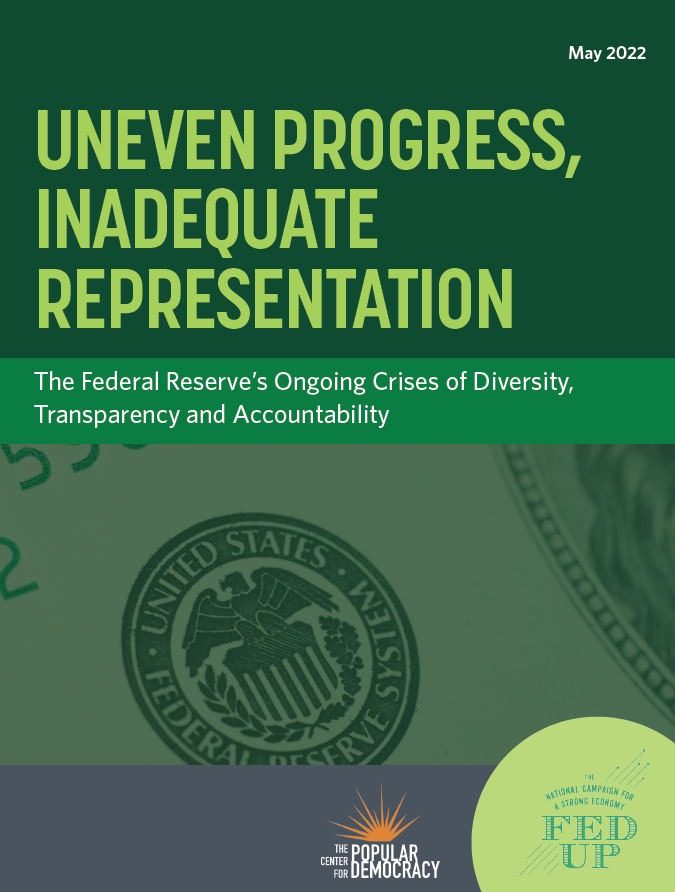 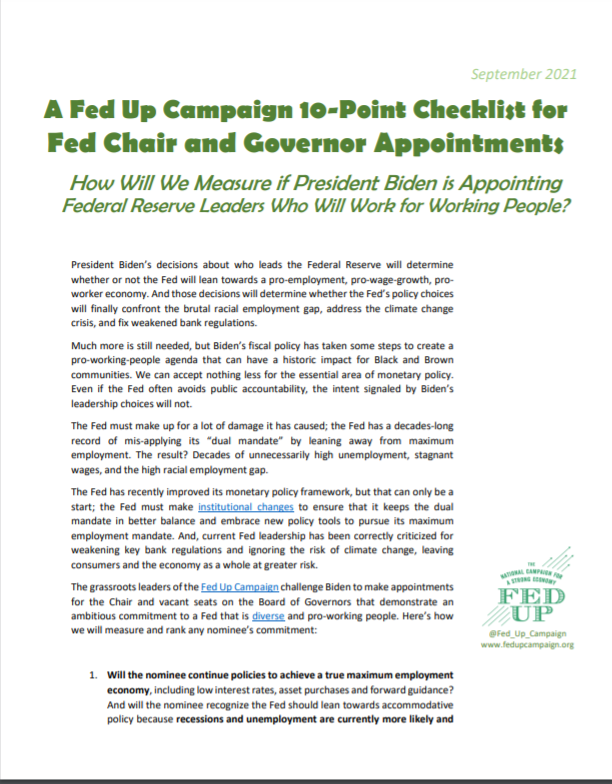 Fed Up 10 Point Checklist for Fed Chair and Governor Nominees 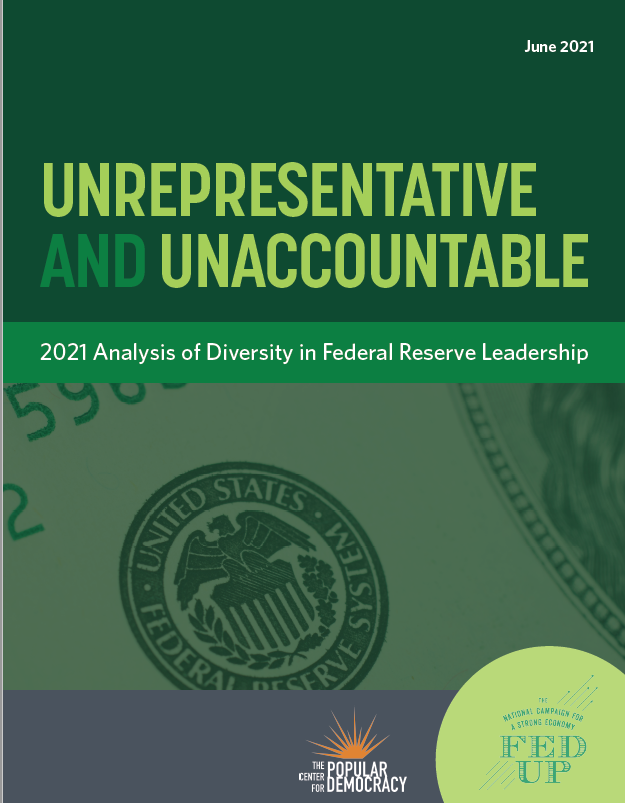 Unrepresentative and Unaccountable: 2021 Analysis of Diversity in Federal Reserve Leadership 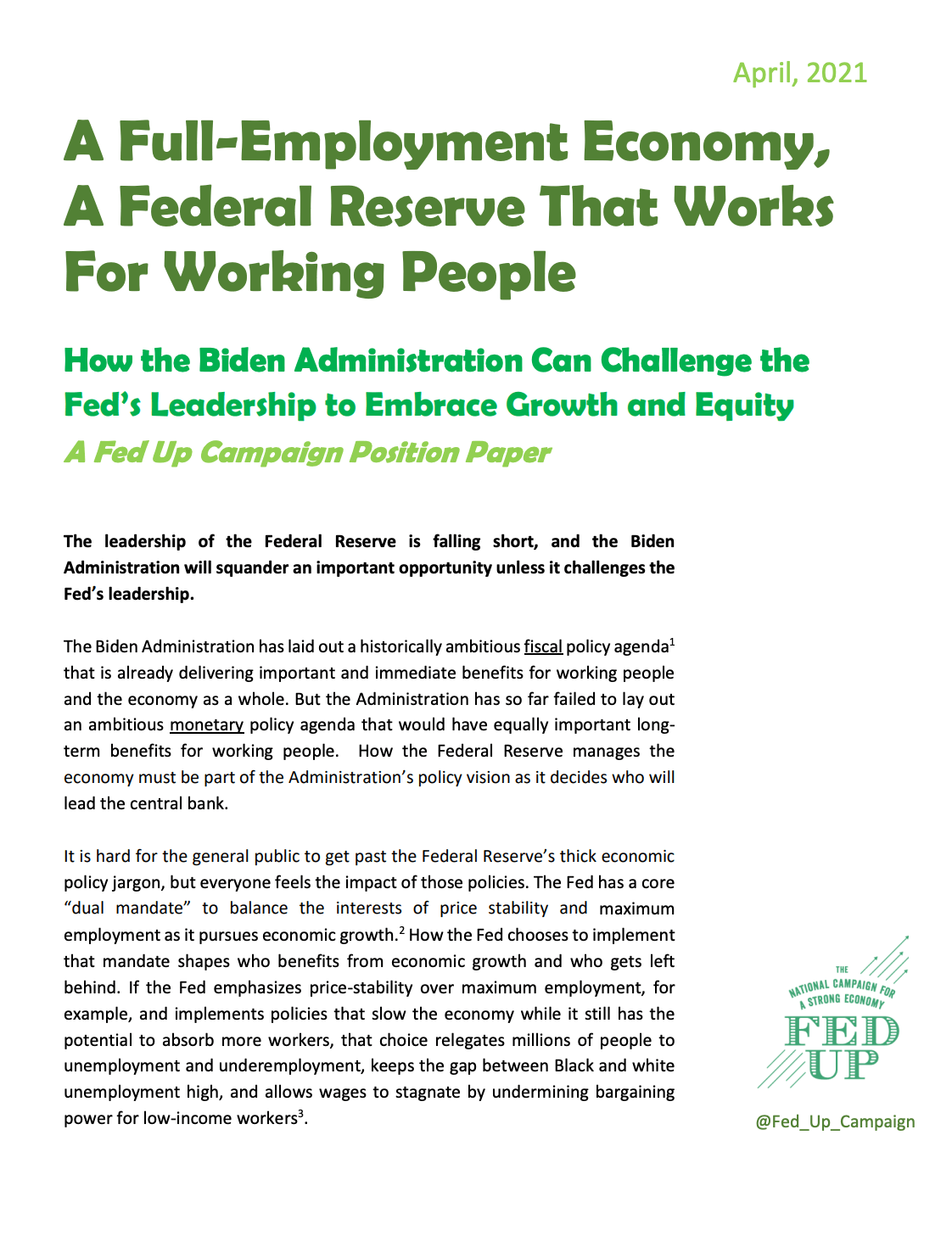 A Full-Employment Economy, A Federal Reserve That Works For Working People 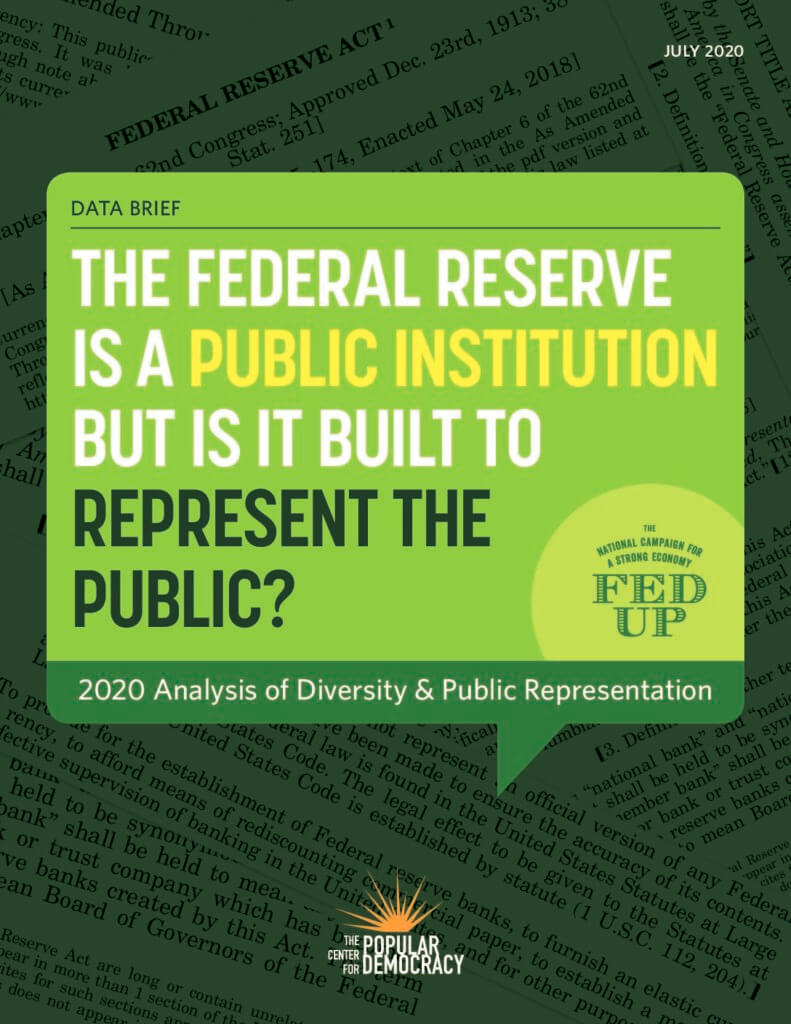 The Federal Reserve is a Public Institution but is it Built to Represent the Public? 2020 Analysis of Diversity and Public Representation

Is the Federal Reserve Neglecting Black Workers in the Economic Rescue? 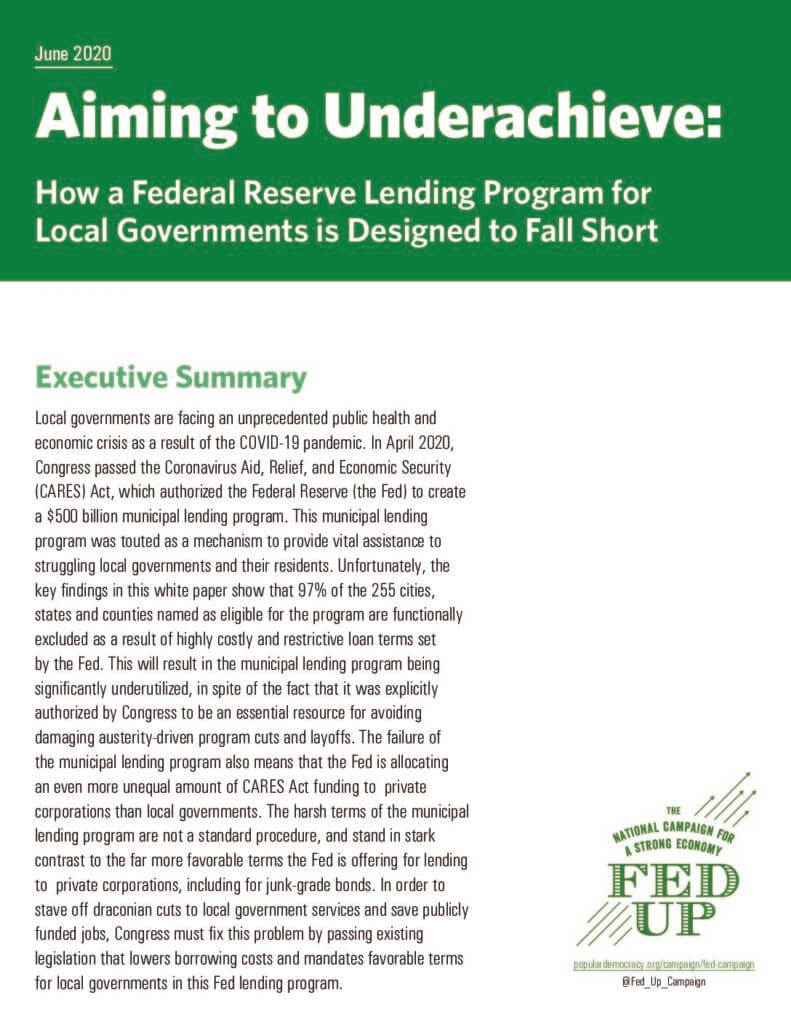 Aiming to Underachieve: How a Federal Reserve Lending Program for Local Governments is Designed to Fall Short 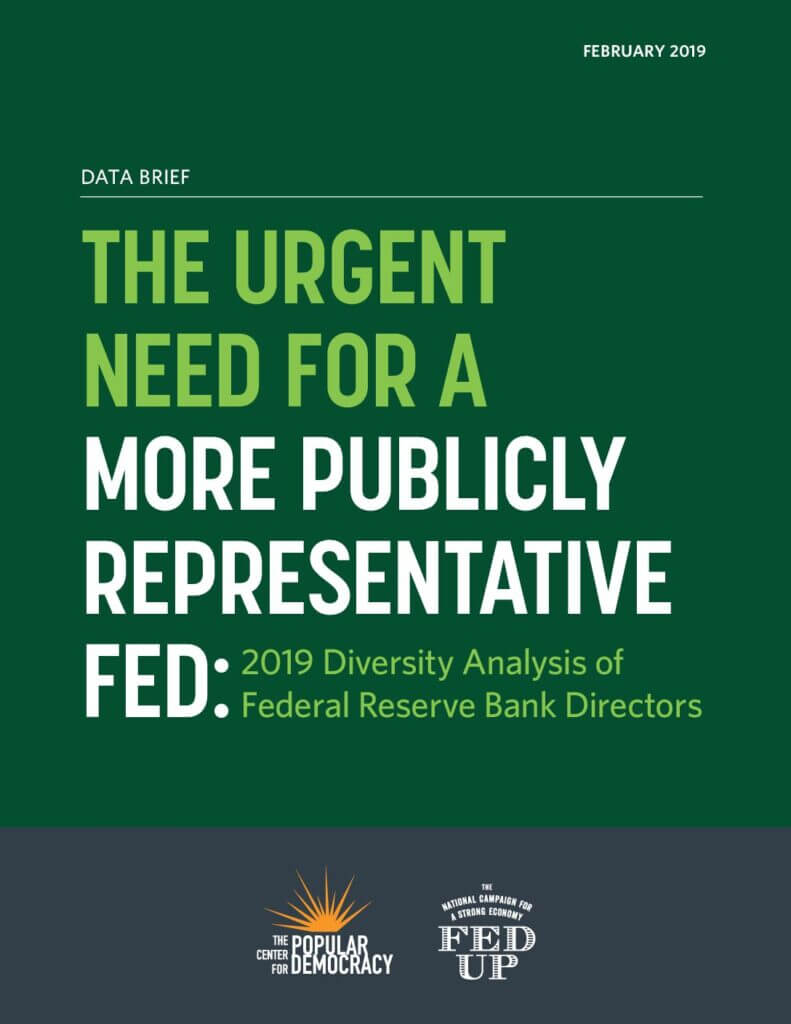 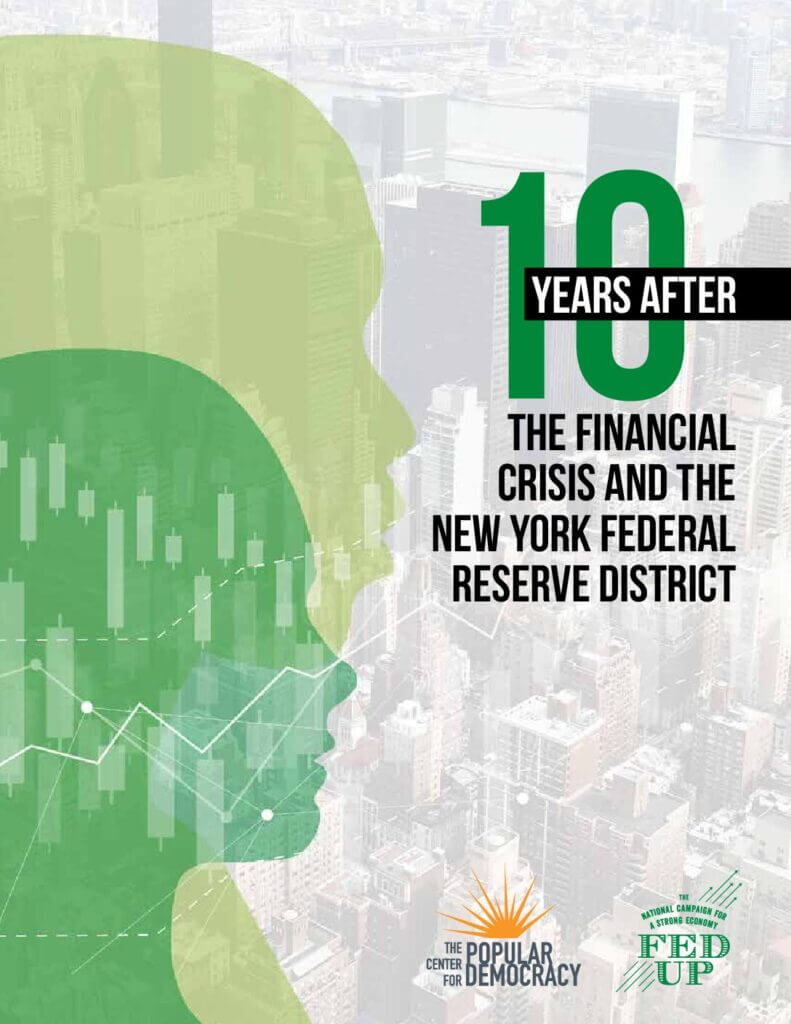 10 Years After: the Financial Crisis and the New York Federal Reserve District 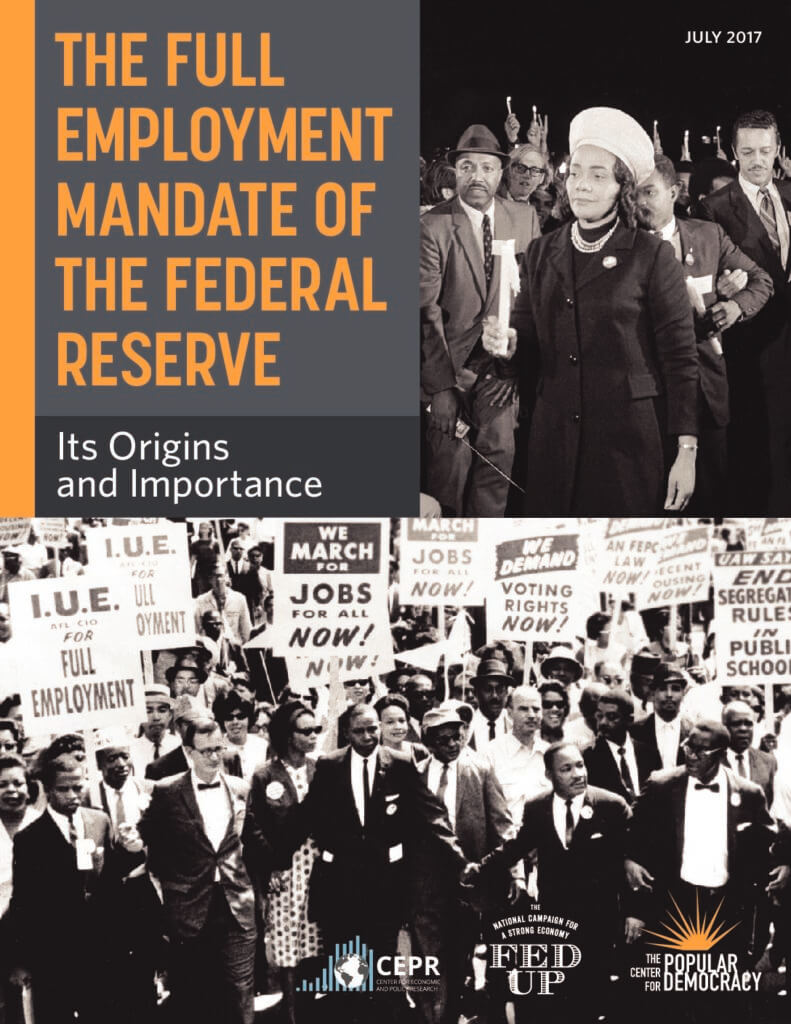 The Full Employment Mandate of the Reserve: Its Origins and Importance 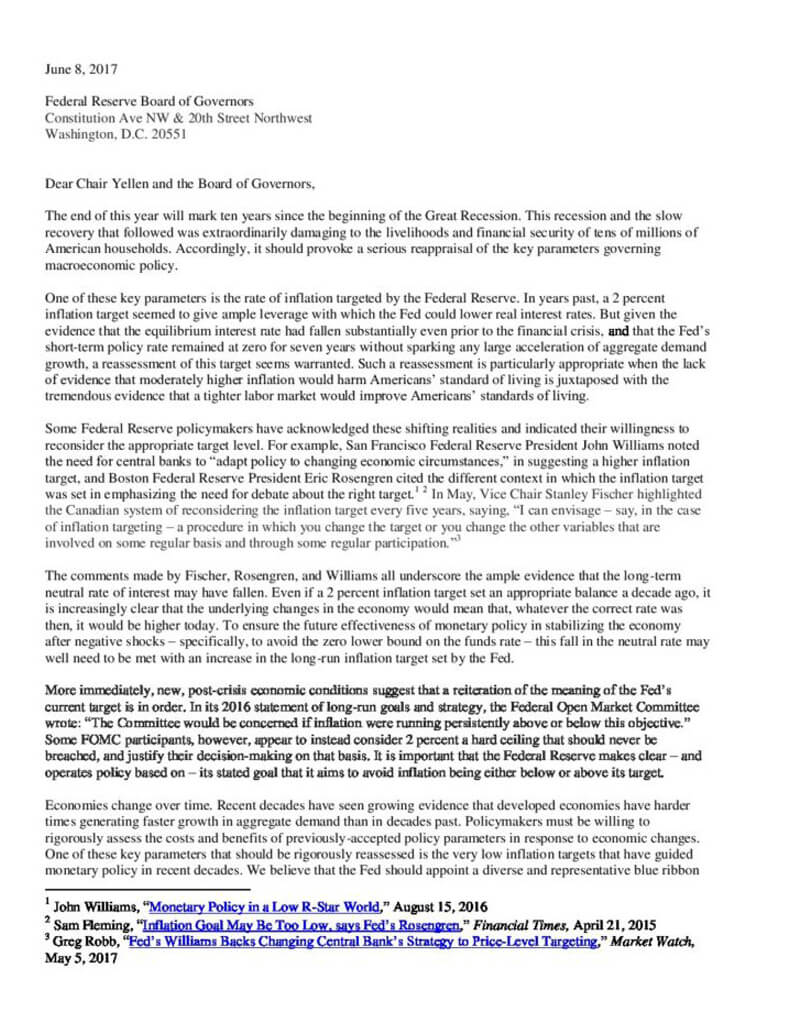 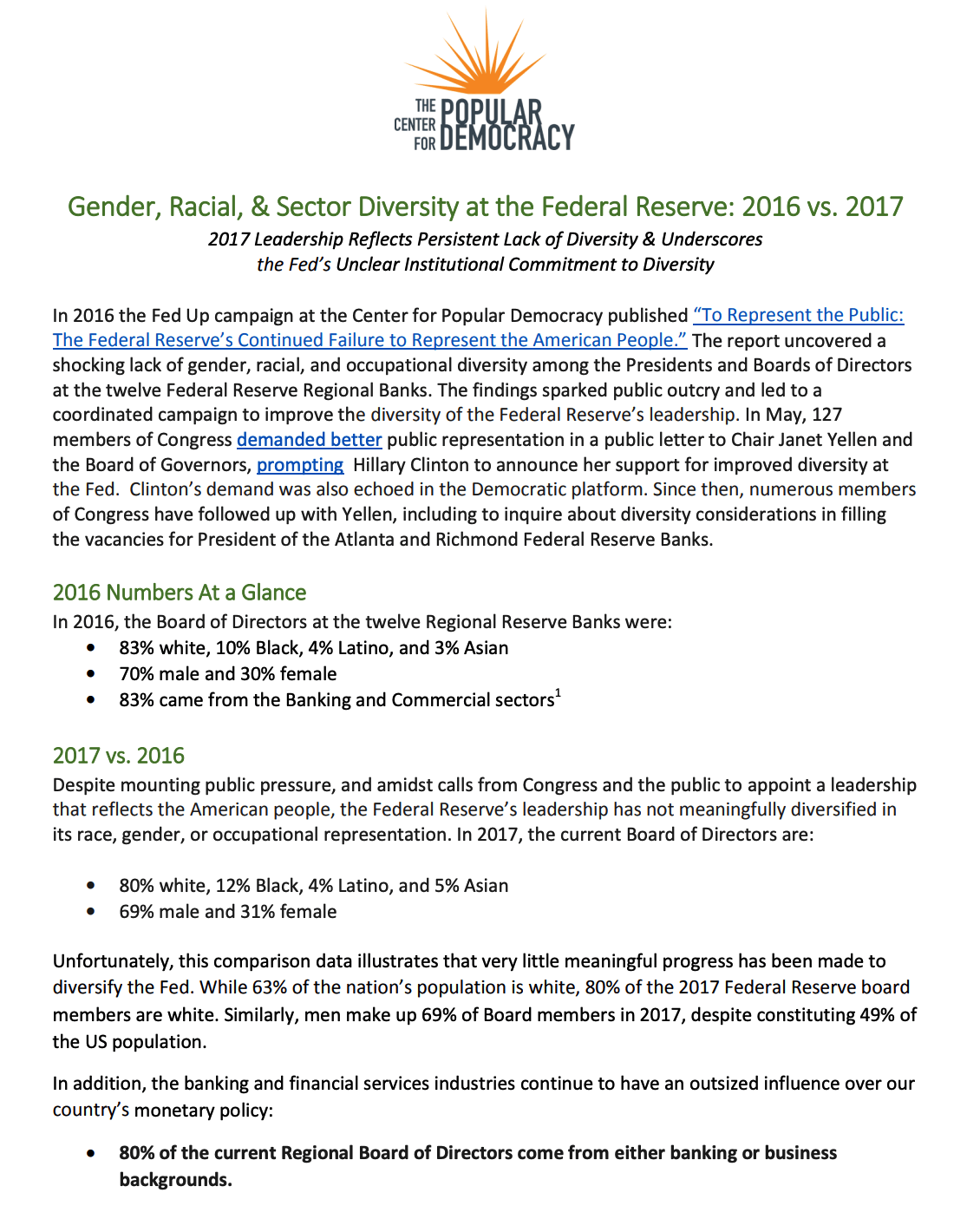 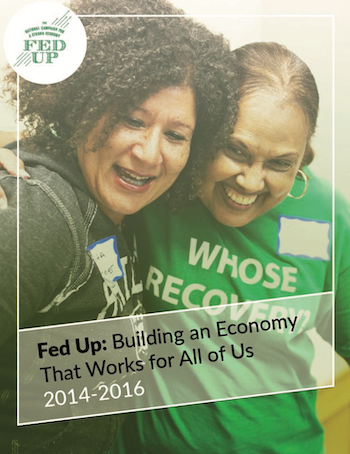 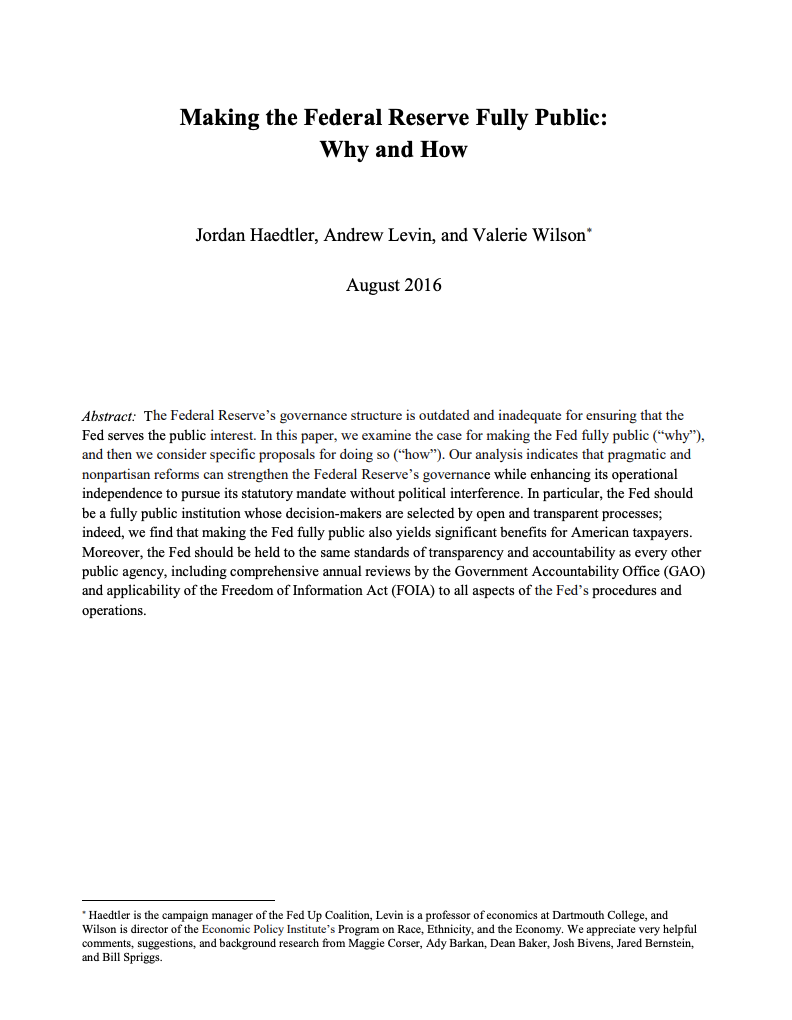 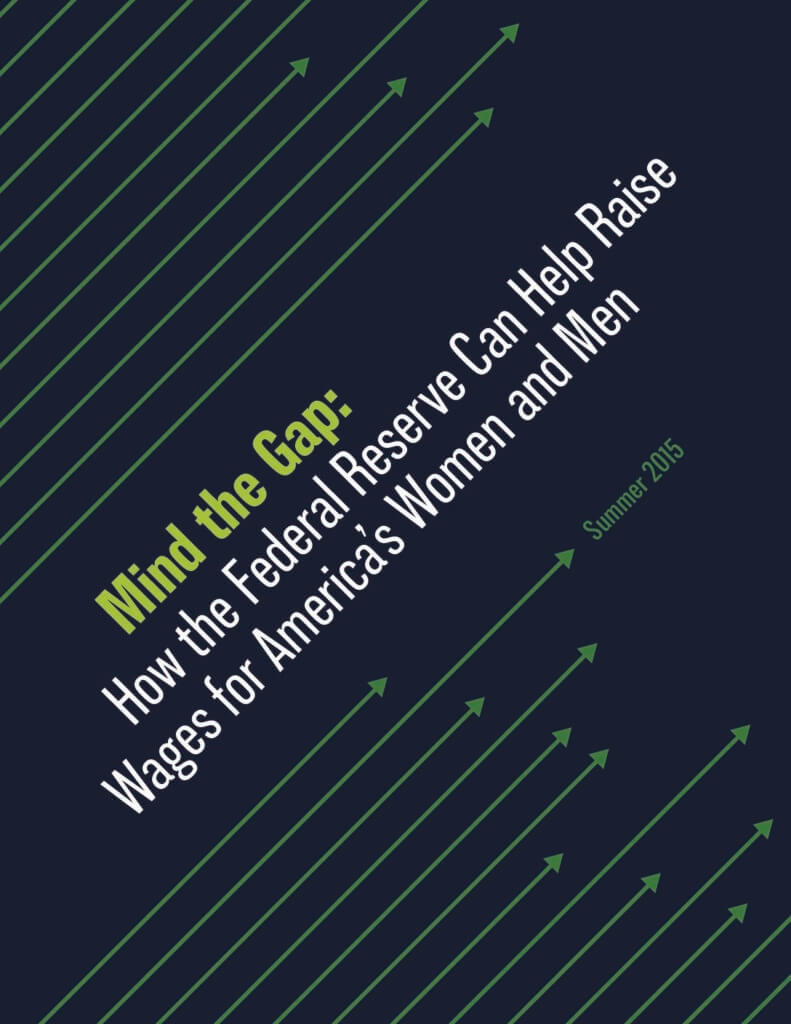 Mind the Gap: How the Federal Reserve Can Help Raise Wages for America's Women and Men 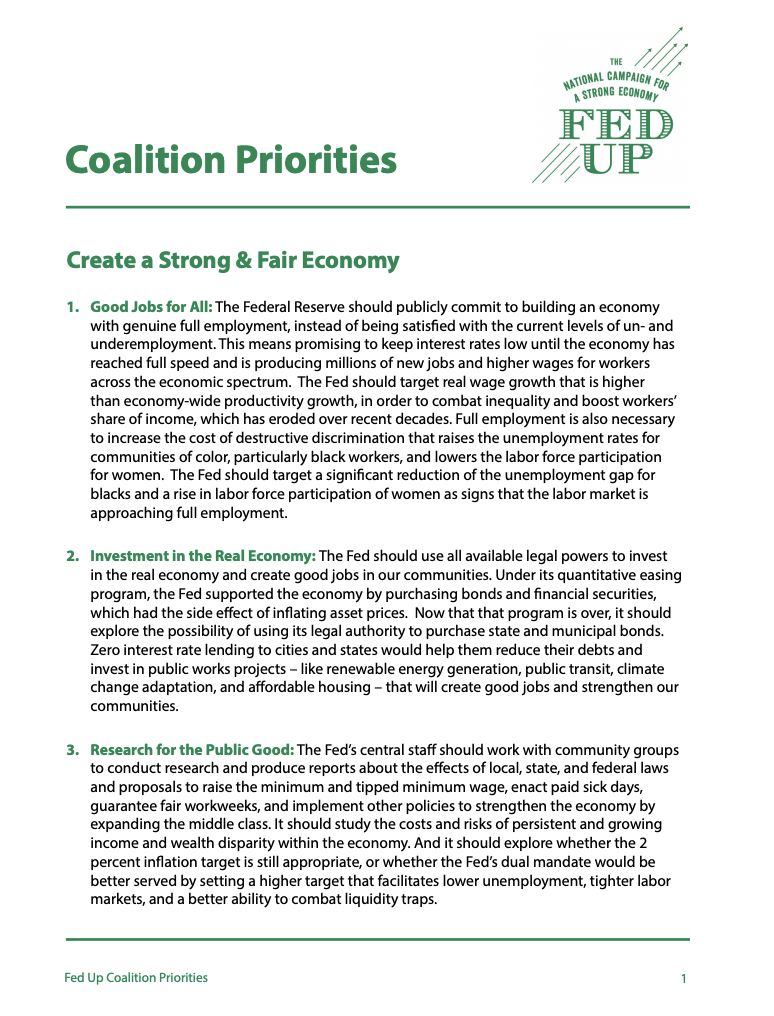 Our Agenda for the Federal Reserve 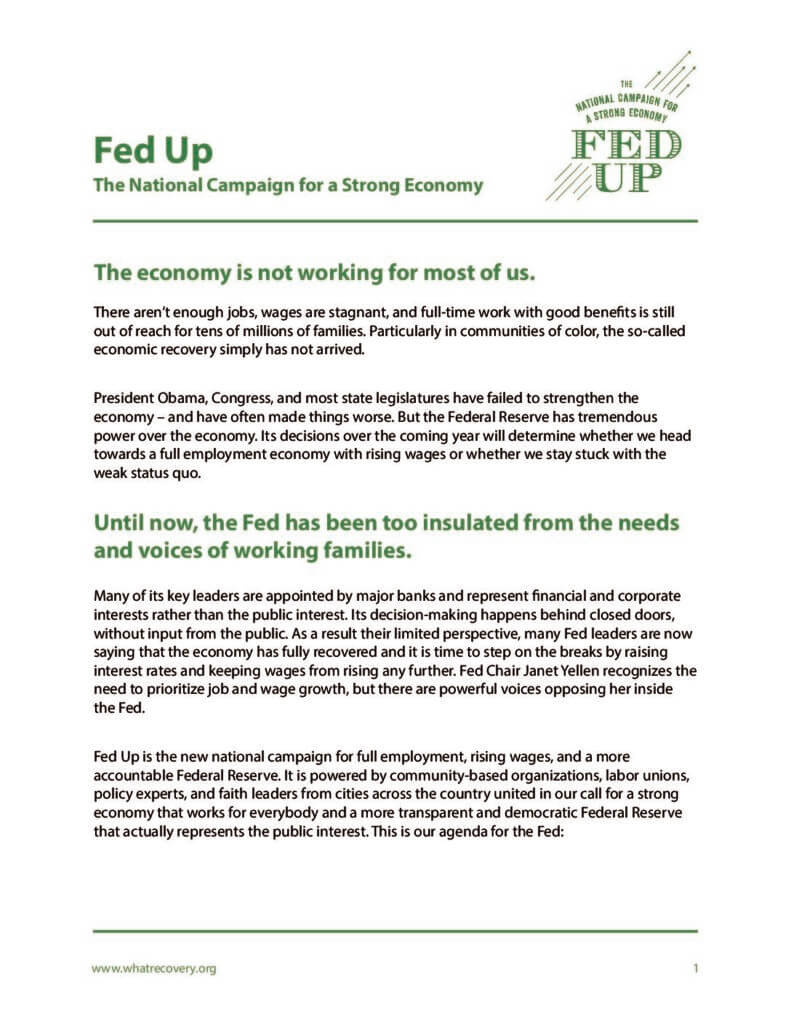 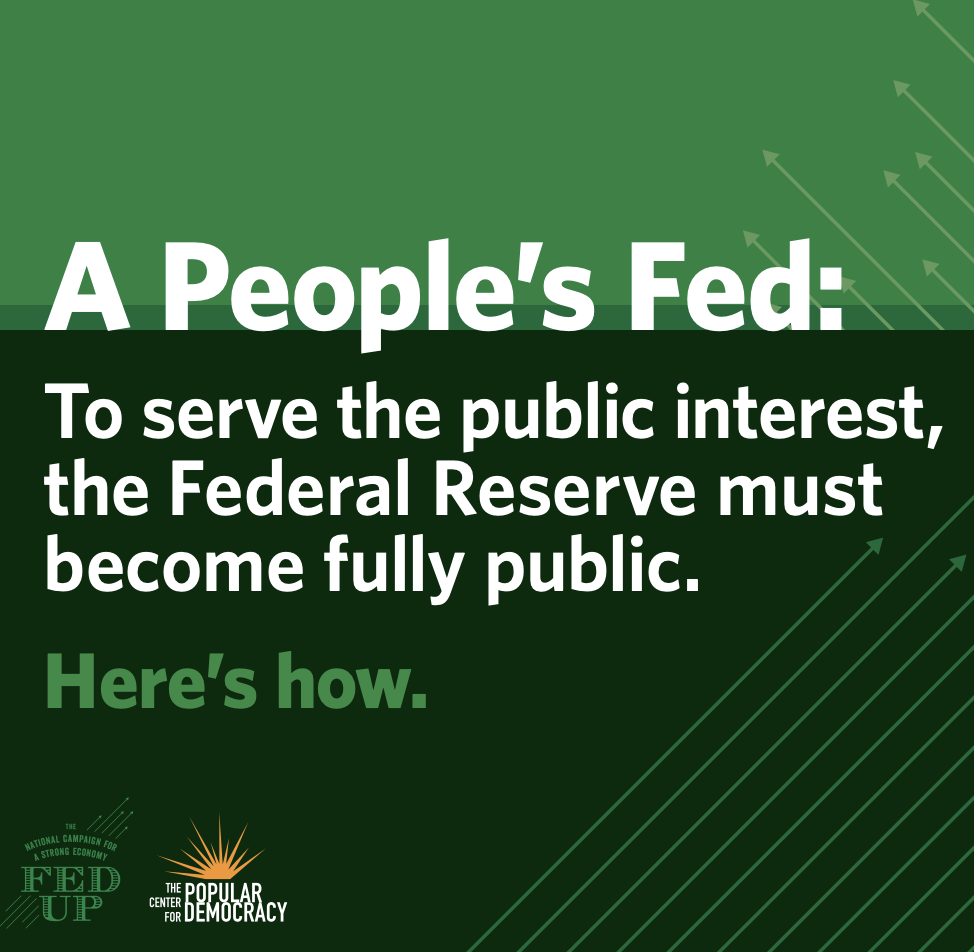 A People's Fed: How to Make the Fed Full Public, Executive Summary

Times are a changin' at the Fed, finally!

Fed Lending Saved Corporate America. It Could Do the Same for Cities and States. 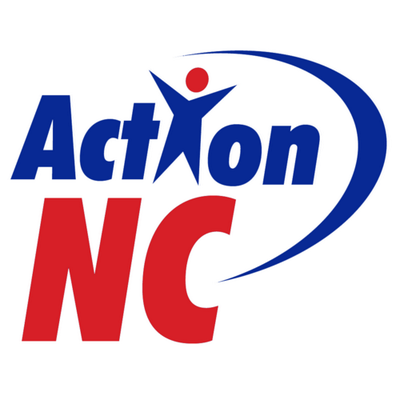 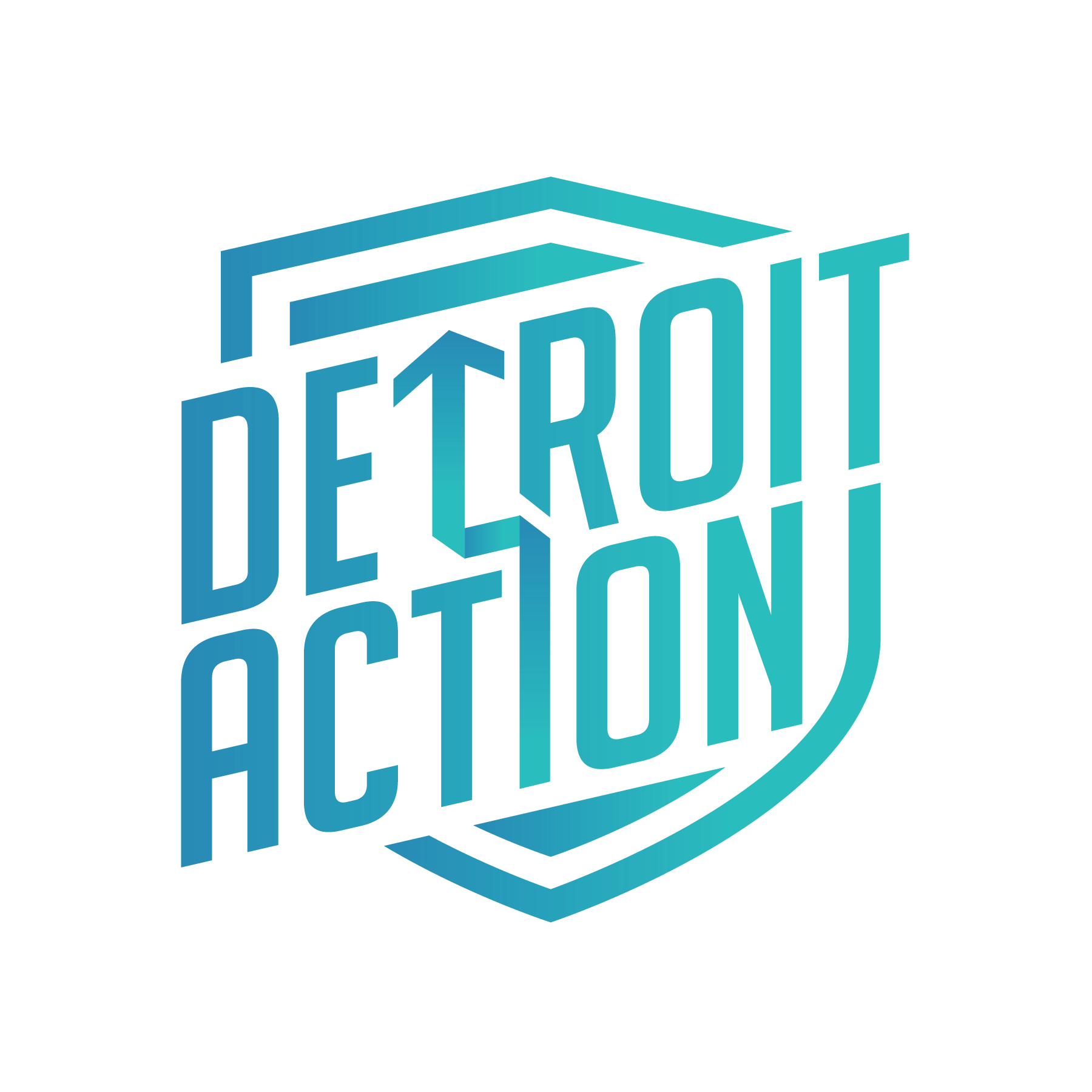 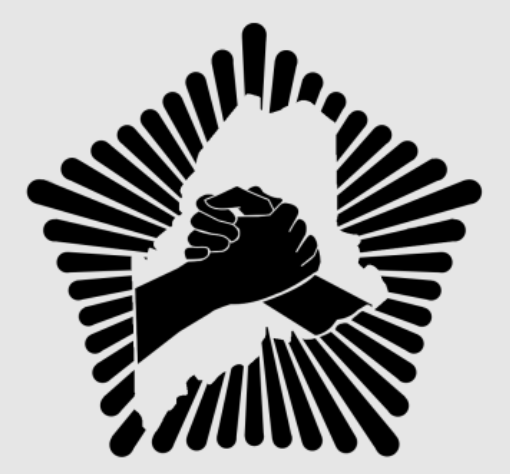 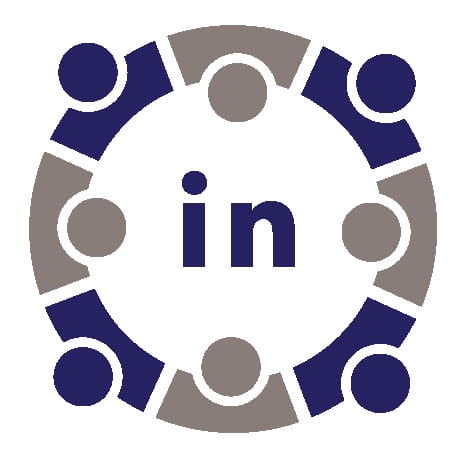 What's Happening and Why It Matters

The Fed‘s core policy decisions include targeting a specific rate of inflation to run the economy hot or to run the economy cold. The law gives the Fed a two-part mandate. Under this “dual mandate”, the Fed is supposed to push the economy to grow while balancing the interests of maximum employment (everyone who wants to work can find work) and stable prices (inflation isn’t too high).
The Fed has to take a lot of things into account, but it is generally the case that price stability aligns with the interests of the financial sector and maximum employment aligns with the interests of working people. With its policy choices, the Fed decides to emphasize one side of the “dual mandate” over the other and one group of people over the other.

Progressive economists believe that “maximum employment” should mean a full-employment economy where anyone who wants a job can find one and where wages are rising for low-income workers because they have increased bargaining power.  As people who are about economic and racial justice, this is one of the most important policy goals that we can fight for because unemployment and underemployment strips wealth and opportunity from working communities around the country, especially in Black and Brown communities.

Since the Fed Up Campaign began organizing in 2015, we have won real progress.  The current Fed Chair, Jerome Powell, has begun to rebalance Fed policy, announcing in August, 2020 that Fed policy would have a greater emphasis on maximum employment and a commitment that the Fed to run the economy hot until we get there.

But we have not come nearly far enough.

Read our newest report about how the Federal Reserve can work for working people.

The Fed has taken some good steps, but those steps have been merely adjusting the existing set of macroeconomic tools that it uses to manage the economy. Progressive economists believe that the Fed must embrace new macroeconomic tools in order to really fulfill the goal of full employment and rising wages.

As we look at the economic and political landscape in 2021, we believe that this is the moment to take on the Fed to win even bigger change. More people can see the economic need because the COVID crisis has left a stronger economy for people who were already doing well, but instead economic devastation for low-income and Black and Brown communities.

And more people can see the political possibilities because the activist progressive movement, which played such an important role in President Biden’s victory, has successfully demanded major changes in Congress’ budgetary and fiscal policies with wins such as the 2021 American Rescue Plan.

In this moment, we can’t let the Federal Reserve and monetary policy follow the same-old policies to help the same-old interest groups. We are demanding a new agenda for the Fed that is ambitious, realistic, and will make the Fed work for working people.

Six Ways to Transform the Fed

1. Achieving a true maximum-employment economy will have the greatest impact for working people, especially in Black and Brown communities, but it is usually the forgotten stepchild of the Fed’s “dual mandate”. Maximum employment must be made a specific and obligatory Fed target.
2. The racial unemployment gap is a persistent and devastating problem. It must be specifically and strongly addressed in Fed policy.
3. Millions of residents lack access to safe and low-cost financial services. The Fed should create a system of Fed-backed bank accounts – FedAccounts – for every resident. This can also serve as a mechanism to strengthen important new automatic fiscal stimulus programs.

4. The Fed uses its core lending capacity to back US government borrowing, as well as Wall Street and corporate financing markets. It must equally use that capacity to support Main Street and the real economy.